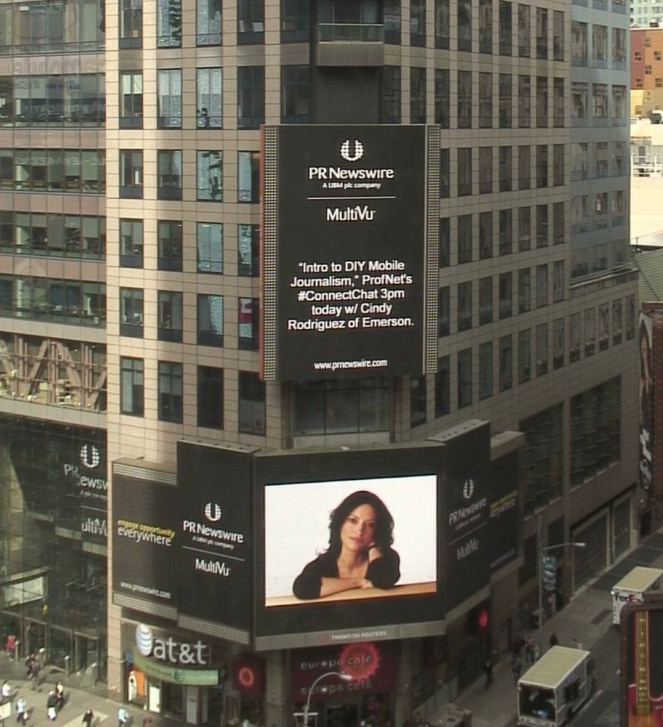 My name and face on a Times Square e-billboard! That’s not something I ever expected.

Click on the photo to see a transcript of the webchat.

In my webchat, “Intro to DIY Mobile Journalism,” I explain how to use a smartphone to collect soundbites, nat sound, video clips, B-Roll, and offer tips on which apps and tools work best for mobile storytelling.  END_OF_DOCUMENT_TOKEN_TO_BE_REPLACED

Below are highlights of the work done by students who participated in the American Indian Journalism Institute in June. We worked long hours for 10 straight days, but it was fun. It was amazing to watch how quickly these energetic budding journalists took to creating video packages.

AIJI has been helping young people realize their dream of becoming journalists since 2001. The program offers a mix of theoretical and practical workshops, as well as real-world experience in newsrooms. It is underwritten by the Freedom Forum Diversity Institute.

END_OF_DOCUMENT_TOKEN_TO_BE_REPLACED

I’m so tired about bloggers blogging about the pending death of blogging.

There are so many bloggers now that bloggers can blog about the best blogs on the web, and there will be readers for THAT.

But, seriously, isn’t it ironic that bloggers are writing about this, considering that 26 million more blogs were created in the U.S. in 2010.

There are now a total of 152 MILLION blogs in a country of 308 million people.

The problem isn’t that blogging is dying, it’s that EVERYONE thinks they can write an interesting blog. They’re cluttering the blogosphere with really lame or stolen copy they regurgitate.

Those blogs will die.

The New York Times reported earlier this year that fewer teens are blogging, precisely because few people were reading their posts. Just because you create a blog, doesn’t mean people are going to read it.

The blogs that will have a thriving audience are the ones that are:

4. allows readers to engage and interact* (this is vital!)

Through word-of-mouth and OUR social networks, we are learning about the better blogs. We might hear about them through Twitter or Facebook and then we’ll read. If it has a VALUE to the reader, they WILL read your WHOLE BLOG POST. And if you have a book on the topic and they are interested they will buy your book.

Blogging is here to stay. It will not be replaced by a Tweet or a FourSquare check-in. It won’t be replaced by Facebook, either. For journalists and writers, these are social networking tools that can be used to establish your brand and draw readers to your blogs.

We don’t know which direction journalism is going, but it’s clear that we are becoming more socially connected through the internet. Facebook is the most visited website in America. People want to connect and interact with information they get.

This precisely what the Web 3.0 is supposed to be about. It’s just that, in some ways, Mark Zuckerberg beat them to it. (I’m often surprised at how many journalists know zip about the semantic web, aka, Web 3.0 being built.)

People on Facebook do not have to be talking about trivial dribble. They can be engaging people in a manner that educates people. But let’s leave that discussion for another time.

The point I want to leave people with is that a microblog is a starting point. It’s an appetizer. The blog is the enchilada, and if it’s a good one, people will savor it and want more. Just make sure that you create a blog that allows people to comment, interact, and respond.

I look forward to meeting all the wonderful budding journalists who will be at the Spring College Media Convention in New York City. My session on how to create a blog will be Monday at 2 p.m. Be there or be FourSquare.

When I became a vegan in early January, several friends  warned me to be wary of soy products. My doctor, however, told me I had nothing to worry about. But more than a month later, I began feeling tired. On a particularly lethargic day, I happened to see my gynecologist, who told me to immediately stop eating soy, my main source of protein. She told me large amounts of soy would raise my estrogen to an unhealthy level.

That night, I began reading whatever I could on the subject in medical journals. I searched PubMed and found dozens of articles that found not just a correlation between the two, but a direct link.

Having written newspaper stories about the dangers of having abnormally high levels of estrogen, I knew what it could lead to: developing breast cancer. As it is, women in industrialized nations are at risk of getting breast cancer because they live in areas where their are high levels of pesticides, PCBs, PBDEs, DDT, the list goes on.  These are all “endocrine disruptors” which mimic estrogen and cause all kinds of havoc on the body’s endocrine system. You can read more about them here.

I know I have my share of toxic chemicals stored in my body’s fat cells. How could I not? I grew up in Harlem during the ’70s when asbestos and lead paint was everywhere and flame-retardant materials were ubiquitous. (All of the aforementioned chemicals are dangerous substances that also mimic estrogen.) Not to mention that all that junk food I ate in my early years (Chef Boy-ar-Dee canned ravioli, Swanson frozen TV dinners, Twinkies, Coca-Cola) were/are packaged in plastics and metals that contain synthetic estrogen.
END_OF_DOCUMENT_TOKEN_TO_BE_REPLACED 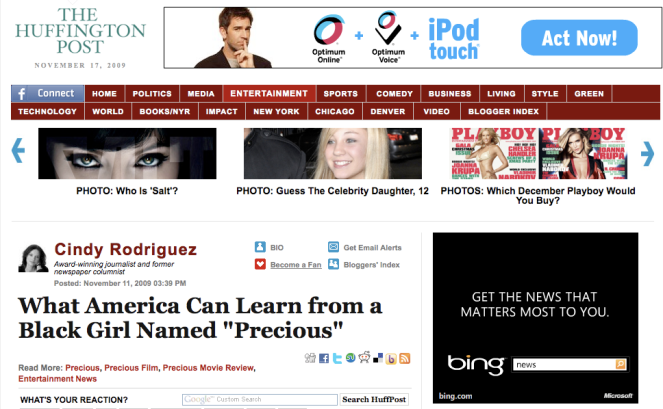 Please read my blog entry on the Huffington Post: http://www.huffingtonpost.com/cindy-rodr/what-america-can-learn-fr_b_354259.html

I am completely obsessed with Michael Jackson. Since his death, all I listen to his music. Even if my iTunes is off, I am singing his songs aloud. Every day, a different song becomes the soundtrack to my day. Today, it’s “Don’t Stop ‘Til You Get Enough.”

Thursday, it took a few hours for it to sink in. He’s gone. He’s out of my life. For hours the night of his death I watched one video after another. I started with his more recent work, then to his earlier years. Then, I was obsessed with finding every Jackson 5 cartoon I could find.

I came to realize I was not alone. Everyone I know is all Michael, all the time.

Saturday night, I went with a friend to a TriBeCa nightclub that was spinning Michael Jackson songs. At one point the DJ started playing crunk and everyone started shouting “Michael!” The DJ quickly changed course and played a string of hits: “Beat It,” “Billie Jean,” and “Thriller.” We had a blast.

Of course part of that obsession is trying to come to an understanding of why he seemed so tormented. His dad beat him and berated him constantly. (Joe Jackson nicknamed him “big nose.”) He barely had a childhood and was surrounded by greedy people who viewed him as a cash machine.

I think it’s unfair to judge him. There’s no way that any of us can understand the forces that turned him into the person he became.
RIP MJ.

Don’t want to let you go. I can never say goodbye…

All you Che lovers who weren’t even born when the revolution went down, but are still idealistic enough to dream about economic parity in the Americas: Guess what? The “revolución”, which has been mass marketed, is now being repackaged with the face of Che’s niece, Lydia Guevara.

Here she is in a PETA ad, speaking about a new revolution — going green, as in vegetarian. (In this prototype, carrots take the place of bullets.) 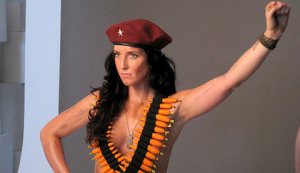 It’s a shame, however, that NAFTA has brought multinational agribusiness to countries such as México, supplanting Mexican farmers who were organic before that became a trend. Let’s hope the international market doesn’t stand for the kinds of chemical-laden frankenfruits they’re producing because eating toxic vegetables is almost as bad as eating meat.

Ever read a copy of the newspaper and feel like its deja vu? Jason Jones of The Daily Show calls this “aged news.” Watch…

I taught an intro to journalism class at NYU this past spring and it was the second time I had incorporated the creation of news blogs as a platform for the students to show off their work.

Amazingly, this semester I only spent ONE class teaching them how to create blogs, unlike the previous year where students were less comfortable with media technology and it took much longer.

In that one class I explained embedding hyperlinks, creating RSS feeds, tweet feeds, uploading photos, posting tags and clouds, creating blogrolls, writing headlines, including cutlines (captions), uploading video, etc. During the semester, they posted their news feature stories, which had to include art elements (photos or graphics that they’ve created or had permission to use). A few weeks before the end of the semster, I threw them a curve ball: they needed to figure out how to create a vlog bio and post it.

My instructions were brief and I gave them a few video tips. Other than that, they were on their own. I had a hunch that making the students figure it out would make it more challenging for them. And it was. All of them, indeed, figured it out.

Here are a few of their blogs that I particularly liked:

I had GREAT meetings with publishing houses today and yesterday and I have a couple slated for next week. It’s a terrific feeling to know that publishers believe in my book. I wasn’t sure what to make of all the meetings. I told my agent, Faith Hamlin, that I didn’t want to get too excited about it, but she told me, “Cindy, get excited! You’re going to get a good contract.”

I guess it’s the practical side of me that wants to just remain cool about it.