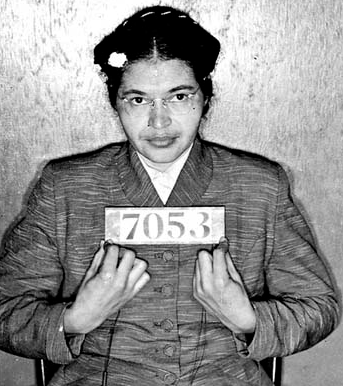 I’m heading to Jerusalem in May on a journalistic mission to better understand the struggles of gay Orthodox Jewish men in the Holy Land. In preparation, I happened to come across a story written in February 2009 about Haredi men (the men who wear black suits and black Fedoras) stoning buses that do not segregate women and force them to sit in the back.

It made me do a double take. Back of the bus?

When I hear that phrase, images of Civil Rights Movement flash in my mind. I think about the cruel and unjust way that black people were treated throughout this country, especially in the South. Separate drinking fountains. Separate bathrooms. White-only schools. “No-blacks-need-apply” signs. Laws that forbid black people from buying property, aka housing covenants.

People of privilege are used to holding power, even if the privileged happen to be so-called rednecks. (Or Haredi men who have been inculcated with the belief that they are superior to women.)

Taking them on is not easy. In the case of the racist Jim Crow South, change required that the nation’s consciousness be rattled and awoken. The spark was Rosa Parks, a black woman who was jailed for refusing to give up her bus seat to a white man.

In 1992, Parks told NPR’s Lynn Neary: “I had not planned to get arrested. I had plenty to do without having to end up in jail. But when I had to face that decision, I didn’t hesitate to do so because I felt that we had endured that too long. The more we gave in, the more we complied with that kind of treatment, the more oppressive it became.”

…which makes me wonder, will there be an Orthodox Jewish Rosa Parks?

Jerusalem’s ultra-Orthodox Jews want women to enter buses by the rear door and sit at the back.

By Ben Lynfield in Jerusalem/ The Associated Press

It is an all too familiar scene: the Israeli bus, travelling near predominantly Palestinian East Jerusalem, is pelted with stones that smash windows and startle passengers. Except this time the stone-throwers are not Arabs but Jews.

The violence is part of an unholy war in which strident elements of the ultra-Orthodox community in Mea Shearim are trying to force Israel’s leading bus company – and, by extension, Israeli society – to defer to their strict religious teachings and sensibilities.

Although Israel defines itself as a Jewish state, what that means in practice is subject to dispute, with religious and secular Jews constantly tugging for greater clout in shaping the character of the country.

The latest battle is over demands that buses segregate men and women in accordance with strict Jewish law on a line connecting the ultra-Orthodox stronghold of Mea Shearim in Jerusalem with the Western Wall.

In the view of some ultra-Orthodox Jews, segregated seating, with women entering separately through the rear door and sitting at the back, is vital to uphold their stringent traditions stipulating modesty and prohibiting physical contact with members of the opposite sex.

Secularists say the push for sanctity on the buses is part of a larger effort to transform Jerusalem into a kind of Tehran. The violence is a major test for Jerusalem’s new Mayor, Nir Barkat, who rode to power last year on the votes of secular residents worried over growing ultra-Orthodox influence.